If you love animals, please donate to Hoofsnhorns Farm animal sanctuary...
Every penny is used for the love and care of the animals (including birds, dogs and cats), many of whom have been discarded, neglected and severely abused. Here's my story: 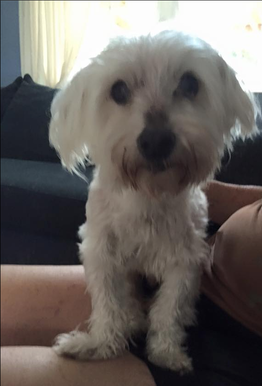 Cosmo Brown July 24, 2015
On July 25, 2015, my 16 year old dog Cosmo Brown (named after Donald O'Connor's character "Cosmo Brown" in "Singin' in the Rain") made his transition at the Hoofsnhorns Animal Farm Sanctuary in Tucson, AZ. After long weeks of agonizing, many tears, and long prayers to God, I finally realized that, in the best interest of Cosmo, I needed to release him to the loving arms of this sanctuary. Cosmo was old, incontinent, and because I rent a condo, he had to wear Tinkle Trousers (diapers) and, as horrible as I felt about doing it, a collar to keep him from barking. (He was a Maltese, and they can be very stubborn, independent, strong-willed creatures. Despite every method I tried, I could not break him of his will to bark incessantly when I was not at home.) The minute I arrived at Hoofsnhorns Farm, the remarkable owners of this sanctuary swept him into their arms, introduced him to all of the other dogs, and I could see that he was at ease and joyfully happy. I had the strong guided feeling that this was where he wanted to be when he passed. I planned to visit him whenever I could, but on his second day at the farm, after enjoying the company of a Girl Scout troop who was visiting the sanctuary, he went into his hutch (the one in which he slept in my bedroom at night) and gently passed in his sleep on Saturday, July 25. Shelby, one of the owners of the farm, sent me a video of Cosmo that was taken just moments before he went into his hutch. His tail was up, and he was prancing around joyfully watching the Girl Scouts. Then he had a look on his face that said to me, "My work here is done." He looked very content, and I knew the last moments of his life were amazing. I had told Shelby before I left him there, that I hoped he would "get his bark back," because the no-bark collar I put on him had stolen his ability to bark. I was so happy to see him running around her mother's house (which was impeccably clean, with no animal odor at all) without his Tinkle trousers on. He pooped and peed immediately, and they laughed, grabbed some paper towels and cleanser and said, "That's why we have these kinds of floors!"

After Cosmo passed away, Shelby called me and said, "...and I want you to know, Summer, that Cosmo DID get his bark back." With my permission, she and her mother lovingly buried Cosmo, and gave him a headstone. In December 2015, I received a gift in the mail from Shelby: a beautiful ceramic pawprint that she had taken of Cosmo after he passed away. I bawled my eyes out as I clutched his tiny footprint.

In my life, I have met some people who were intensely crazy about their pets and other animals, but NEVER in my life have I met two people like Shelby and her mom, Sidney, who cared for Cosmo for that 24 hour period. Every animal at the sanctuary was happy, extraordinarily healthy and robust, with glistening coats (and, for some, feathers). Their love for the animals is beyond anything that I have ever witnessed in my life. In my heart I feel that Cosmo was a sort of mascot who wanted to transition at the sanctuary in order to call my attention, and the attention of others, to that extraordinary place. Hoofsnhorns is deeply dedicated to helping many animals who otherwise would have been euthanized. They believe that every animal that comes to them, is directed there by God. They work closely with the Humane Society who alerts them to animals who have obvious potential for longer lives, if only given a second chance, love and devotion.

By clicking the Donate Now button below, you will be taken directly to their donations page. Or, please visit their website at www.hoofsnhornsfarm.org.
You will find many wonderful products such as jewelry, soap, lip balm and more, all made by Shelby in her "spare" time. The proceeds of these products go towards supporting the farm.
Cosmo Brown, aka Cosimoto and Mr. Brown, truly loved by me and my two daughters, Emily and Bobbi. He had an incredibly fun and full life. Walks on the golf course, running up and down the slides at the middle school, sled rides in the snow, little red wagon rides, trips to California and Salt Lake City, and overnight visits with my parents, and with my friend in Peoria, and hug fests with the many guests that I have had in my home over the years. He lived with other dogs, and had a Pit Bull and a Rottweiler as neighbors when I lived in Cornville, AZ. Cosmo let them know who was "the boss." :) He had visits to the creek, hikes in the red rocks, visits to the doggie parks as he aged. He played dress-ups and was pushed around in a stroller by my children. He had his own Easter egg that he would crack open and eat every year (he had an iron tummy), and his own stocking at Christmas. My daughter, Bobbi, created some incredibly inspired cartoons of Cosmo and her cat "Kitten" for my newsletters many years ago. Kitten and Cosmo were the best of friends until Bobbi moved away after high school. I just found these cartoons in my archives, and am so glad about it, because they capture the depth and true essence of "Mr. Cosmo Brown the Dog." (Another name that he'd been dubbed over the years.) 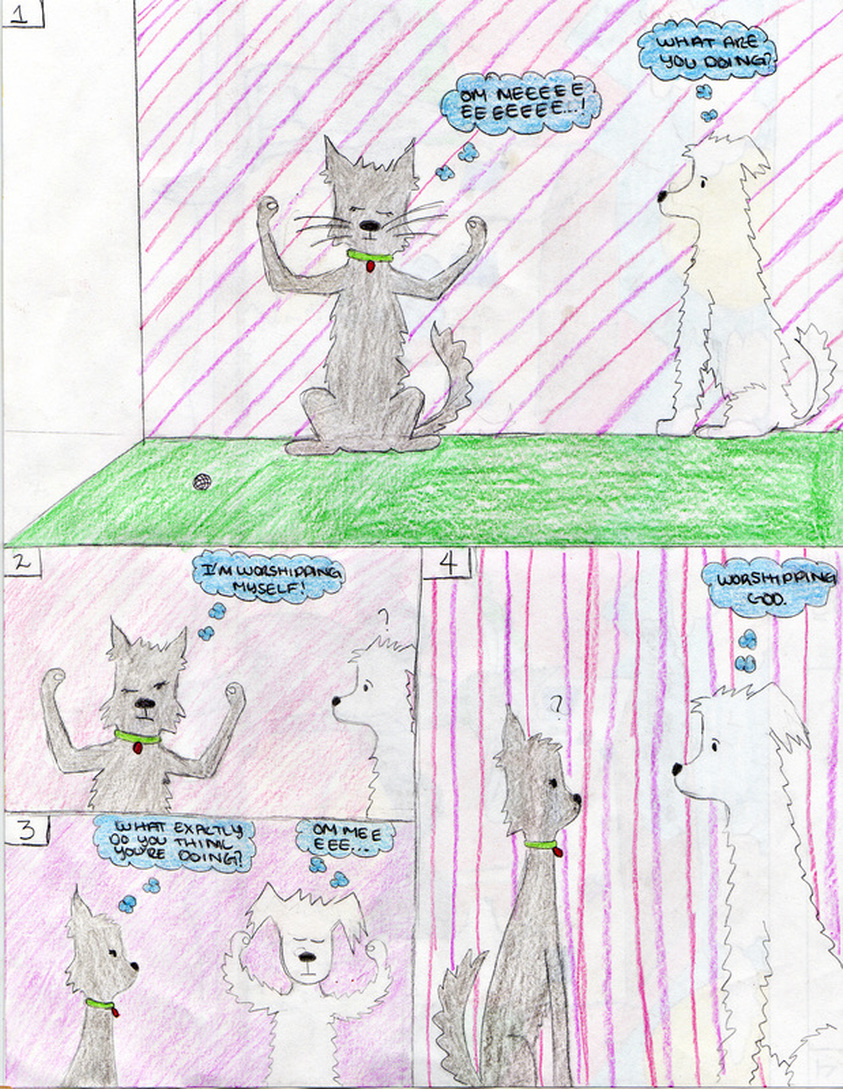 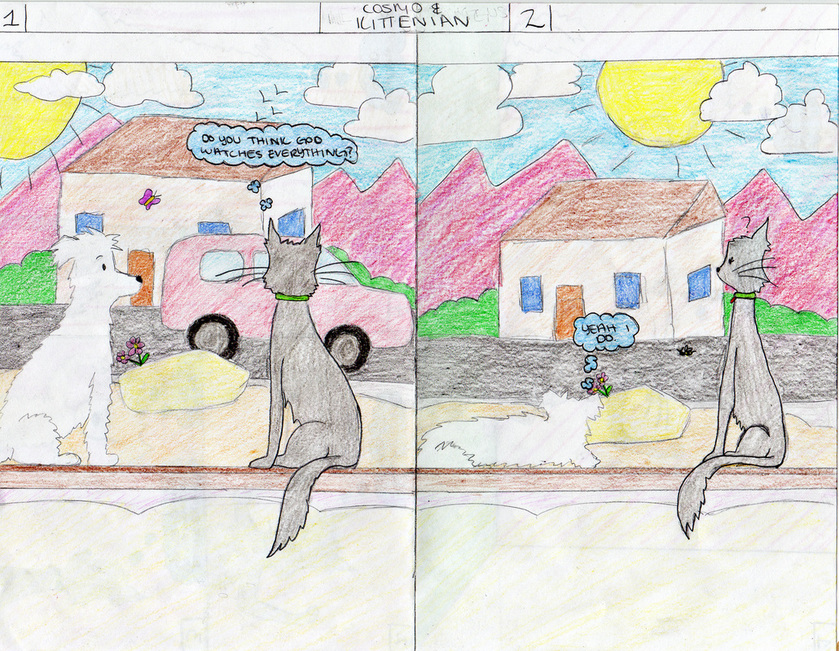 ABOUT US
FAQs
© 2013-current • SUMMER BACON • ALL RIGHTS RESERVED