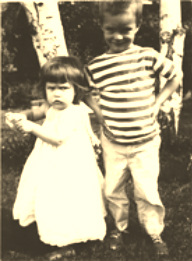 ​Summer Bacon (her birth name) is a spiritual teacher, and has been a Trance Medium for the beautiful spirit, Dr. James Martin Peebles since 1994. She first met Dr. Peebles in 1989, through Trance Medium, Thomas Jacobson [To Dance with Angels, by Don & Linda Pendleton]. When Thomas quit channeling, she decided that she did not want to lose her connection with Dr. Peebles, and proceeded to set out to "find" him with her heart.

Summer has been a spiritual seeker all of her life, starting at the age of 11 months when she realized that she was here on earth to find out "what this truth thing is about once and for all." [The photo to the left literally captured the moment that she had this thought in 1962.] For her entire life Summer was "chased by the light," spending much of her time trying to avoid or deny the spiritual occurrences that bombarded her on a daily basis. Visitations from spirits, memories from other lifetimes, undeniable psychic experiences, encounters with extraterrestrials and angels, out of body experiences, and two visitations from Jesus were just some of the experiences that filled her days. Meanwhile she attempted to live like a "normal" child and teenager, hoping to fit into society like a "normal" person someday.

She obtained a BA degree in English Literature from UCLA in 1984, and immediately went to work for ABC-TV during the 1984 Summer Olympics in Los Angeles. Later she was hired to work for Goodson-Todman Productions as a Prize Coordinator for the game show Super Password. She also spent two years managing her family's state-of-the-art 24-track recording studio in the 80s. Eventually she was hired on by a growing human resource services company where she worked as Benefits Director, Director of Employee Communications, and finally bought the Communications Division to work independently as a graphic designer, typesetter, writer and marketer.

As a graphic designer, developing corporate images and writing ad copy couldn't have been easier, as she began to consult one-on-one with spirit (through visualization and clairaudient hearing) about what her clients' needs were before she even met them. Still, there was a burning desire to reconnect with Dr. Peebles again, and so she sat night after night relentlessly seeking him with her heart…for nearly seven years.

Despite all of the seemingly glamorous jobs she has held, Summer has also faced some difficult circumstances and very tough decisions along the way. After enduring over a decade of spousal abuse, she raised her two children without child support, and spent nearly three years living on the edge of poverty. During the fiscal collapse of 2008 she ended up filing bankruptcy and surrendering her home. She knows what it means to lose everything, start over, and keep moving forward, and then lose everything, start over, and keep moving forward again. What kept her going? Her deep and abiding relationship with God and spirit. And, she knows, if she had not had those experiences, she would not be the spiritual teacher that she is today, with the ability to relate to people and their challenges.

Summer's mission is not to prove the existence of God and Spirit to anyone, but rather to help demystify mysticism in order to empower people to create their own relationship with God and Spirit. She enjoys helping people who are struggling with their spiritual identity, and trying to figure out how to fit into and enjoy everyday life. Aside from channeling Dr. Peebles, she has personally counseled individuals who are afraid of ghosts, have had extraterrestrial encounters, fear death, are trying to connect with their guides and learn how to deepen their relationship with God by listening to that "still, small voice within."

In 1994, Summer channeled Dr. Peebles for the first time. For the next three years she channeled hundreds of spirits, including the dearly departed, for nearly anyone who needed help. She did all of the channelings for free, while still running her graphic design business and raising her two daughters.

One day Dr. Peebles came through and announced that her training was over, and that he would be coming through to speak exclusively, with some exceptions.

Since then, Dr. Peebles has helped thousands of people find peace and purpose, no matter their life circumstance. Over one hundred people attended her special events in Sedona, and her private, trance, and counseling sessions were booked months in advance. She now focuses exclusively on one channeled message each week through her "Dr. Peebles Speaks" series.
Meet Dr. Peebles
ABOUT US
FAQs
© 2013-current • SUMMER BACON • ALL RIGHTS RESERVED