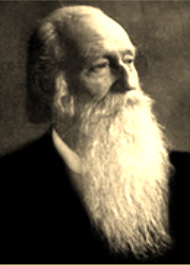 Dr. James Martin Peebles died in 1922 at the age of 99.9 years old. He was a prolific writer, a naturopath, medical doctor, and a Spiritualist minister. He traveled the world five times, healing, counseling and ministering to the masses. He was also U.S. Consulate to Turkey.

Four days after his death in 1922, on March 24, in Los Angeles, California, Dr. Peebles spoke through his friend, Guy Bogart, a personal friend of Dr. Peebles and executive secretary of the Longer Life League. One of his first announcements from the other side was, "There is no rheumatism in heaven!"

Dr. Peebles says that he became enlightened at the time of his transition (death). After his transition he was counseled by his guides to continue his work with "the many rather than the few" on planet earth by channeling through trance mediums around the world. He is now the very wise, witty and compassionate spokesperson for a community of spirits that he refers to as "the band of angels," counseling and ministering to the masses from the other side. He even has his own Facebook page!

It is Dr. Peebles' kindness and earthiness that makes him a tangible and accessible spirit guide, and has endeared him to people from all walks of life.

Dr. Peebles encourages us to "enjoy the journey," even in the "darker space" which he calls "the fertile soil where you plant yourself and find and touch the face of God."

His teaching are based on The Three Principles.
read & download the three principles
ABOUT US
FAQs
© 2013-2018 • SUMMER BACON • ALL RIGHTS RESERVED